We’ve all heard the myriad health benefits of reducing our meat consumption, but what about the benefits to our planet? Mother Earth News published a great article succinctly summarizing the environmental impact of our monstrous American meat consumption, and I wanted to share it. It goes without saying that raising, preparing, and eating meat is deeply ingrained in our culinary identity as Americans, but aren’t American innovation and ingenuity a greater source of pride? What would be so revolutionary about an American shift to a fiscally responsible, sustainable, self-preserving plant-based diet? Wouldn’t that shift put us ahead of the curve? Food for thought.

Here are the facts that jumped off the page at me from the Mother Earth article:

My decisions as a consumer are weighing more heavily on me as I become aware of their rippling consequences (I think this is called “maturing” in some cultures. hmm). I love the occasional taste of meat and am by no means scolding…. but this is shocking stuff. If you’re considering reducing how much meat your family eats but you’re not sure how to approach the change (most of us are programmed to cook with meat), try introducing meatless Mondays or Mark Bittman’ wonderful flexitarian approach: VB6. Vegan before 6pm!

What are your thoughts on the effects of excessive meat consumption across our country?

You can read the entire article, Try a Flexitarian Diet for Better Health and a Better Food Budget, here. 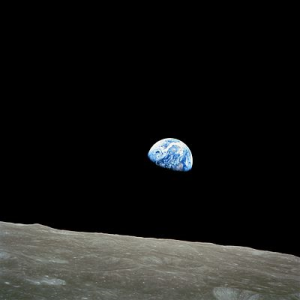 Earthrise. I LOVE ya and I want to take care OF ya!