Fennel. So lovely, so fragrant, so exotic-looking when wedged between carrots and celery in the produce section, like a ballerina on a bus. It stumps check-out clerks and home cooks, causing both to miss out on its nutritional benefits if they do not know what in the heck to do with a bulb once they’ve brought it home. 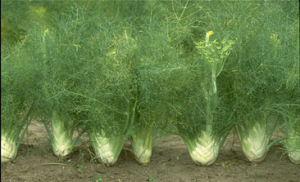 Fennel packs vitamin C, fiber and potassium in each serving, making it a nutritional powerhouse and especially beneficial to runners and athletes recovering from hard workouts. Low in calories and incredibly flavorful, it’s a stellar addition to any home menu. All while earning you “cook unafraid of unusual vegetable” points (score!). 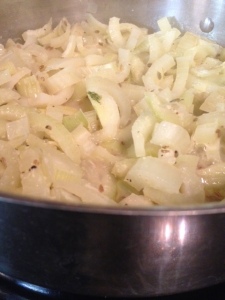 My favorite way to prepare fennel is the simple braise outlined below; another favorite is tossing it into this A!G Provencal Fish Stew. This braise pairs well with chicken, fish, or pork, or with loads of other veggies- I’ve served it alongside roasted carrots, onions, and brussels sprouts as a hearty all-veggie dinner. Hope you enjoy! And how else have you prepared fennel?

After prepping the fennel, this recipe is a one-step wonder. You’ll toss all of the ingredients into a saucepan and cook in just a moment. Clean your fennel bulbs and cut off a slice of the thick root end. Lob off the fronds and reserve for another use and cop the stems and root into 1-inch slices. I find it easiest to quarter the bulbs and cut from that point.

Now before you toss everything into your pan, let’s talk butter. Recent studies have shown that “bad” saturated dietary fat, if it comes from high-quality organic sources (think organic butter from grass-fed cows, grass-fed or pasture raised beef, raw cheeses, strained organic yogurt, whole organic milk, eggs form pasture-raised chickens, etc.), may not be that bad after all. Scientists and the food-minded argue that it’s the highly-processed trans fats and chemically altered saturated fats and preservatives that are killing us. A 2010 study by the American Society for Nutrition concludes that:

“A meta-analysis of prospective epidemiologic studies showed that there is no significant evidence for concluding that dietary saturated fat is associated with an increased risk of CHD (coronary heart disease) or CVD (cardiovascular disease).”

WHOA. In a recent conversation about the saturated fat vs. high-quality full-fat food debate, a friend pointed out that the food our healthier, more active, longer-living grandparents ate was full fat, was often organic before that was a “thing,” was fresh, and was more satiating due to its high fat (and fiber) content. Hmm. Very true. Our grandparents also ate more vegetables and whole grains than we do- no slabs of meat at each meal and no bags of Doritos and partially hydrogenated cheese dip. And they ate smaller portions. The argument for full-fat foods does not, by any means suggest that eating plates of hand-cured, gourmet, farm-raised bacon with six eggs and toast slathered in butter is a good for you- everything in moderation, my friend. Journalist and food activist Michael Pollan, with whom I’ve recently become obsessed, says it best:

“Eat food. Not too much. Mostly plants.”

So to celebrate that mantra and to test the new theory, which makes perfect sense in my mind, let’s eat veggies and use butter today! Back to the recipe. Add all ingredients to a deep saucepan and bring to a boil. Reduce heat, cover, and simmer for 10 minutes. Uncover and continue cooking over medium for another few minutes, until most of the cooking liquid has evaporated; don’t allow the fennel to get mushy. There you have it! Serve. What are your thoughts on the saturated fat debate? I’d love to hear your comments below!