Hey there! In last week’s post, I mentioned my “dying wish” meal: Dominican beans and rice. “What would your last meal be?” has got to be my favorite food-related question out there- it can reveal so much! Last week’s post got me thinking about the rest of my culinary bucket list- the foods and restaurants I want to try before I kick the you-know-what. I put pen to paper on these and here’s what I came up with: 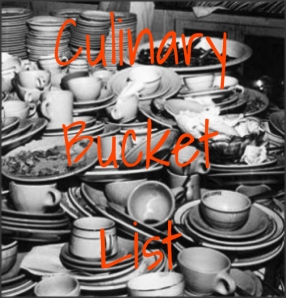 Dreaming is wonderful but being grateful for what you have seen and done is where it’s at.  Here are some of the standout culinary moments I’ve been fortunate enough to experience:

Sounds like I’ve got my priorities straight, right? My memories have always been punctuated by food- what I ordered when we went here or there, what we ate the day that this-or-that happened, what so-and so cooks so well. Today’s recipe is an approximation of one of the dishes on my list- the lobster roll! My OCD prevents me from trying this recipe with lobster- I’m holding out for the real thing in the right place- so I used shrimp. Didn’t heat up the kitchen too much and loved every bite. Bonus recipe below for a cooling summer smoothie!

Bring a pot of water to a boil. Add the Old Bay seasoning, the lemon, and the peppercorns. When the water is boiling, add the shrimp and boil 2-3 minutes, until opaque and cooked through. Strain and set aside, tossing the lemon and peppercorns. I recommend chilling the shrimp for a while to bring to room temp or cooler.

Meanwhile, dice the onion, celery, and tarragon. When the shrimp are cool (or warm, your call), toss the veggies and tarragon with the mayo, a sprinkle of celery seed, and some cracked black pepper. Fold in the shrimp and taste for seasoning.

Toast hot dog buns and drizzle with a bit of melted butter or some olive oil. Pile high with the shrimp salad and enjoy! Serve with a refreshing:

Toss all ingredients in a blender a whir away. Serve over ice. Crazy straw optional, but recommended.

Would be quite tasty with a bit of coconut rum… Hmm. Rum is good for pondering. Sip your smoothie, ponder, and tell me….

What have YOU checked off of your culinary bucket list? What’s left to be tasted?